"The Replacements" was the fifth episode of the 11th season of 7th Heaven.

While Annie is out of town, Eric finds himself looking after three teenagers, T-Bone, Jane and Margaret, who are homeless and hoping the Camdens will find it in their hearts to take them in. After Annie comes home to the chaos and new faces, Eric also realizes it's time to tell Annie what he's been hiding from her for weeks. Meanwhile, Sandy finds herself in a romantic triangle with Martin and the guy she's been seeing from school, Daniel.

Featured in the opening credits are: 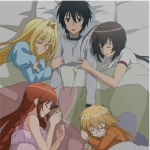