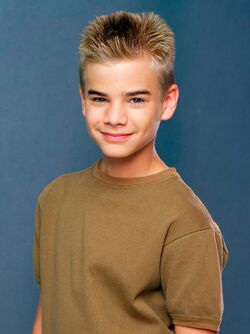 Simon Camden, (born April 4, 1986) is a fictional character on the WB Television Network show 7th Heaven. He is the second son and the fourth child of the Camden family who live in the fictional town of Glen Oak, California from 1996-2003 (seasons 1-7). David Gallagher returned as Simon in seven episodes of season 8, became a main character again in seasons 9 and 10. When the show was introduced Simon was the fourth of five siblings and was 10 years old. He later became the middle child of seven when his younger twin brothers Sam and David were born. He is known to his siblings as "The Bank of Simon" because he always seems to have and loves to make money.

Simon asks God to give him a dog. He suggests to Eric that if a dog is found in their yard he can keep it. Eric agrees. Annie goes to the pound and finds a dog for Simon. They keep it and name her “Happy”. Simon starts to drive everyone nuts with a difficult question: Where is heaven? As Halloween approaches, Simon prepares for a pumpkin carving contest and goes to any length to win first place. Simon tries to convince his family that he can make himself invisible. Simon tries to get Matt to let him out of a tetanus shot that he needs for little league season.

Simon wants to move out of the room he shares with Ruthie. He gets invited to a classmate's “make-out” party. Simon prepares Happy for a tv commercial; Happy's original owner sees her in the commercial and wants her back but allows Simon to keep her.

Simon witnesses his teacher intervening between a young boy and his screaming father he feels guilty and asks Eric for help. Deena’s ex boyfriend shows up at school and threatens to shoot him. He practices his babysitting skills on Ruthie. Simon works to restore his little sisters holiday spirit when she sees that Matt is the mall Santa Claus. Simon learns that Deena had leukemia when she was younger. While waiting for his mother to give birth, Simon prays in the hospital praying room for baby brothers. He and Deena go on their first date together and bring Lucy to accompany Deena's brother.

Simon assumes the role of the 'man of the house' but feels Matt is undermining his authority when he keeps on making fun of him. He considers dropping out of cooking class because he's the only boy that enrolled. He attempts to entertain a classmate who has a crush on him. Eric and Annie find out one of his friends is in possession of marijuana. Simon is caught making lewd hand gestures in front of the school. Simon comes across graffiti artists, one of whom coughs up blood after huffing and is in a dilemma after being threatened not to tell anyone what is going on. He is later admitted to the hospital and the mother blames Simon and Eric. Simon and Deena have a fight. Simon and his friend Nigel experiment with smoking but are actually doing a project about selling cigarettes to minors. He befriends a classmate with Tourettes Syndrome. He and Deena confess to giving each other love bites. Simon gets dumped by Deena and later finds out the real reason why she ended it.

Simon attempts to fit in in high school. Lucy enlists him to assist her with her homecoming Queen campaign to gain popularity in school. Matt blows Simon’s chance at a big date with an older woman when he is distracted by a woman and forgets to pick him up. Simon is on a quest to change his image by piercing his ear. Simon is persuaded to use his sister's bad reputation to boost his 'cool' quotient at school and gets into some trouble of his own with twin bad girls, Carol and Sue Murphy. Simon makes new friends, one of whom insults Annie and Lucy with his chauvinistic remarks. Norton, the kid that Simon befriends, is a fan of violent rap whose negative attitude towards women seems to be influenced by misogynist lyric. Matt and Simon try to figure out why they delivered Mrs. Bink to the hospital. Matt and Lucy are suspicious after Lucy accidentally finds a condom in a misplaced wallet. They learn that it belongs to Simon, who just so happens to be spending the evening with his new lady friend, Sasha. Annie gets in the middle when Simon tries to break up with his girlfriend. Simon is mortified when word gets around school that he's a virgin.

Simon pressures his father to let him get his learner's driving permit. Simon stands up for a bullied student only to have the boy tell him that he is going to shoot his tormentors. Simon considers dating a 16-year-old pregnant girl that he meets on a bus. Simon's tardiness and poor people skills put his new job in jeopardy. Simon is attracted to Lynn who is already dating one of his friends. Simon meets up with an old girlfriend, Sasha and they both try to catch up on their personal lives. Matt, Lucy, Simon and Ruthie are banished to the garage apartment after protesting Annie's decision to give the place to Mary. Simon and Matt use the twins to attract women. Simon uses Robbie's car to practice driving and he accidentally smashes into Matt's vehicle. Simon persuades his parents to let him go to a party after they meet his friend, a senior who promises to look out for him but when Simon comes home drunk his siblings attempt to help him. Simon is asked out by a senior, named Maria on Valentines Day. Simon is angry when Matt does not choose him to be his best man.

Simon's paid dating service is becoming profitable until Cecilia rats him out to Eric. Simon finds out from Cecilia that a girl from his dating service is pregnant. He convinces her to drop her baby off at a safe haven hospital. Simon and Cecilia discuss having sex for the first time and naïvely share the news with their parents---which doesn't go too well when Cecilia's father finds out. Simon is ecstatic when Cecilia's father agrees to let him see Cecilia but feels hurt and confused when she starts avoiding him. Annie is shocked when she finds a pack of cigarettes in Simon's bedroom. Simon catches Cecilia's father’s business manager stealing from petty cash. Simon and Cecilia have an unusual way of keeping their minds off sex. Simon is crushed when Cecilia won't go to the prom with him. Simon is turned down by a potential prom date.

Simon is crushed after unintentionally killing a classmate in a car accident. Simon tells Cecilia that he needs space. Eric ponders Simon academic future now that he refuses to go back for his senior year of high school. Eric accompanies Simon to a Board of Education meeting to try to secure him an early graduation. He’s upset that nobody seems to care about his departure for college. The time has come for Simon to seek early admission into college, so he prepares a video essay to go with his application. Simon unexpectedly announces he is coming home for the summer. Simon's return to Glen Oak creates conflicted feelings for his ex-girlfriend Cecilia, who is torn between her feelings for Simon and her current boyfriend Martin.

Simon appears to be getting extremely close to his new girlfriend, Georgia causing Eric and Annie to suspect they are having sex. A fed-up Simon is reluctant to talk to his parents about his relationship with Georgia after Eric and Annie crash their date at a restaurant. However, Simon admits that they are having sex and that he's currently on disciplinary probation at college for skipping classes to be with her but is still maintaining an A average academically. Simon realizes he has been using his relationship with Georgia to block out the guilt he still feels about the fatal car accident that happened last year. Simon comes to terms with his fears over the accident last year and goes on a bicycle ride with Justin. Simon has something to tell his parents but can't get up the nerve to tell them—which involves his former girlfriend Georgia who shows up back in his life unexpectedly. Simon's ex-girlfriend claims she is pregnant, and as Simon tries to figure out how to tell his parents, he does not realize that there is more to the story. Matt is upset when Simon, who has just faced a pregnancy scare with Georgia, wants Matt to prescribe birth control pills for him and his new girlfriend. Simon has always been careful about practicing safe sex, so he panics when his girlfriend admits to having an STD the morning after they've slept together. An extremely nervous Simon comes home to Glen Oak to await the results of his STD test from the clinic. Simon informs his new girlfriend, Rose that he will not have sex with her but avoids telling her the reason behind his decision. She gets fed up with him but comes back to him when she finds out his true intentions for them—marriage. When Simon and his new girlfriend Rose make an unexpected visit to Glen Oak to meet their respective parents, Annie begins to suspect their relationship might be on a fast track.

The Colonel and Ruth are in Glen Oak for a visit. Rose wants them to know that she and Simon are engaged. Everyone else, including Simon, thinks that this is not a good idea. Simon finds a way to slow down his relationship with Rose but her stubbornness derails his plan. Simon has money troubles and his phone service gets shut off. Simon suspects Rose is keeping secrets and the two resolve an issue of trust. Simon and Rose's relationship appears to be on its last straw—much to the Camden family's delight. Simon and Rose have dinner with her former fiancé and the man is nothing like what Simon expected. The Camden’s receive official invitations to Simon and Rose's wedding and to their dismay, they learn that the date conflicts with Matt and Sarah's graduation from medical school. Simon leaves Rose in the dark about his schoolwork problem but all three guys come to realize the gals are not as clueless as they'd hoped. As Rose gets ready to make a huge announcement, Simon breaks down as he realizes that he may have trapped himself in a marriage that he does not want. Simon and Rose prepare for their wedding day, despite speculation that it is not the right decision.

Retrieved from "https://7thheaven.fandom.com/wiki/Simon_Camden?oldid=7823"
Community content is available under CC-BY-SA unless otherwise noted.