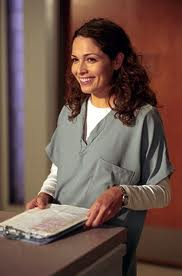 Dr. Sarah Glass is the only child of Richard Glass and Rosina Glass, and the wife of Matt Camden. She first appears in the season six episode "I Really Do" as one of Matt's co-workers in the free women's clinic where both Matt and Dr. Hank Hastings work. In that episode Matt is determined to find the woman he's going to marry as soon as possible. He has a date with some girl he doesn't know, but since he is called in to go to work instead at the last minute, he ends up talking to Sarah Glass all night.

Sarah asks Matt out for coffee and they grow quite close. Sarah is an only child with a Rabbi for a father - thus her Jewish faith is very important to her. The next night, they go out for dinner after introducing the other to their parents. Sarah reveals that she is independently wealthy, unlike Matt, along with many other "intimate" details. They marry that night, but when they try to tell Sarah's parents they end up only admitting they "got engaged". Ruthie is the only person other than Matt and Sarah to find out about the marriage (and keeps it a secret until the end of tenth season episode "Secrets").

The Camdens have dinner at the Glass house, in an attempt by Matt and Sarah to bring the families closer. After both fathers do all they can to stop it, Matt and Sarah marry for the second time, but the first time in front of their families.

Matt and Sarah attend medical school at Columbia University in New York City, although they return (sometimes together, sometime separately) to Glen Oak every so often. Their marriage has some shaky patches, and Matt getting re-acquainted with his ex-girlfriend Heather doesn't help matters. Sarah keeps her maiden name for the hospital, and as Matt and Sarah at first don't reveal to the others at the hospital that they are married.

It is revealed in the 10th season finale that Sarah is pregnant with twin boys.

Retrieved from "https://7thheaven.fandom.com/wiki/Sarah_Glass?oldid=7778"
Community content is available under CC-BY-SA unless otherwise noted.