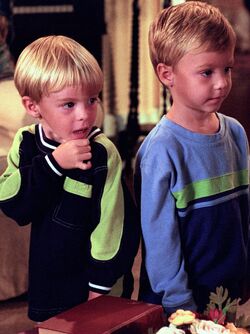 Samuel "Sam" Camden and David Camden, (born February 14, 1999) are fictional characters on the WB Television Network show 7th Heaven. They are the youngest children of the Camden family who live in the fictional town of Glen Oak, California from 1999-2007 (seasons 3-11).

The twins were originally played by all four Brino quadruplets but once the boys started ageing and showing differences between them, Lorenzo and Nikolas Brino became the official actors for Sam and David. The fraternal twins were born during the fourteenth episode of season three. This episode was WB’s most watched hour. They were partly named after the R&B duo Sam and Dave, and are quite possibly the worst characters of the entire series.

In episode fourteen of the season Annie goes into labor for the sixth time and ensues the older kids must find ways to entertain themselves. The babies are delivered with the last minute assurance of Dr. Hastings, the doctor that nearly killed Matt at birth. Sam and David arrive home from the hospital and won't stop crying until Lucy sings them and the rest of the Camdens to sleep.

On Valentines Day the Camden family throw a special party to celebrate the twins’ 1st birthday.

In order to help Mary pay off her bills, the other Camden siblings steal $500 from the twins' banks.

The twins switch out of their cribs into beds.

The twins steal money from their parents, Kevin, Lucy, Simon, Ruthie and from the can in the kitchen. The Camdens celebrate the boys' birthday on the evening of Valentine's Day but after Kevin proposes to Lucy, everyone present sings "Happy Birthday" to them and they get to blow out the candles on a professionally-made pirate-themed birthday cake.

Cecilia teaches Sam and David on how to ride a bike.

The twins end up in major trouble in their first day at kindergarten. Eric struggles to teach his young twin sons the importance of voting in America. Its Valentines Day and the family comes together to help the twins celebrate their sixth birthday. Eric and Annie suspect that Sam and David are feigning being sick so they can stay up late and eat sweets. Sam is jealous of the attention being given to an ill David.

The twins use an interesting weapon to coax the entire family into sharing their personal secrets.

Eric begins home-schooling the twins and finds even more stress added to his life when their third grade teacher shows up at the house. David and Sam are left home alone.

Retrieved from "https://7thheaven.fandom.com/wiki/Sam_and_David_Camden?oldid=7836"
Community content is available under CC-BY-SA unless otherwise noted.