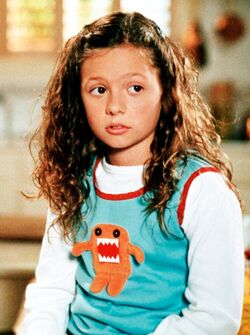 Ruthie Camden, (born November 8, 1991) is a fictional character on the WB Television Network show 7th Heaven. She is the youngest daughter and originally the fifth child of the Camden family who live in the fictional town of Glen Oak, California from 1996-2007 (seasons 1-11).

When the show was introduced, Ruthie was the youngest of five and 5 years old. She later became the fifth child of seven when her younger twin brothers Sam and David were born. She is known for knowing everything thats going on in the Camden house.

After the death of her grandmother, Ruthie desperately wants to hear her grandmothers favourite song as a way to hold onto the memory of her. After overhearing Eric rant about people not knowing the "Star-Spangled Banner", Ruthie is concerned that she will have to leave the country if she does not learn it, so she enlists Simon to teach it to her. Ruthie starts pre-kindergarten but on her first day some problems are created. Ruthie feels empowered by her new class phone list and decides to test the emergency phone numbers. Ruthie has a going-away party for her longtime imaginary friend, Hooey.

On the first day of a new school year Ruthie is nagged by her her teacher about wearing a hat. Ruthie practices her artistic skills on the walls of her and Simons room and has a bad reaction when Annie punishes her. Ruthie is broken-hearted to learn the truth about her favorite costumed character, Snappy the Stegosaurus.

Simon pays Ruthie to do well on a test. Ruthie reunited with her imaginary friend. She involves her whole family in her playground war with a schoolmate. Ruthie tries to run away from home because she doesn't get as much attention as she used to. She finds a chimp living in the backyard but nobody in the family believes her. She wants to be a bride at Heather’s wedding.

Mary helps Ruthie with her secret plans to defy convention and play on the school football team. She saves the day by convincing the church board to give Eric his built-in annual raise so they can buy a new car. Ruthie wins first prize at school. Ruthie gets in trouble at school. She makes money from her science experiment by charging people a dollar who want to know. Ruthie takes advantage of her new boyfriend and does her best to get back together with him.

Ruthie learns she will have to spend another year with her teacher Ms. Riddle. Her prayers are answered when she is transferred out of her nemesis’ class and into a private school. She discovers the manipulative fun of keeping a diary. Ruthie spreads phoney tales to draw attention away from Mary. Ruthie discovers Frankie and Johnny's baby, Mercy on the Camden doorstep. Annie feels slighted when Ruthie plays an unfunny joke after the twins recognize her as their mama. Ruthie has a secret reason for skipping homeroom.

Robbie gives Ruthie a playful nickname and she comes up with a less-pleasant one for Lucy. Lucy snaps at Ruthie, and teases her before bed about being called "Snookie", and it comes back to haunt her when she unwittingly ends up causing a rift in Ruthie and Robbie's relationship. Ruthie feels that Mary owes everyone an apology for the actions that led to her initial ouster from the Camden home.Ruthie is hesitant to go to a party because her friend tricked her into asking out a boy that she is already going out with. Eric suspects that Ruthie knows a secret about Matt and Sarah, and thinks they are married already. Ruthie is corresponding by e-mail with a soldier in Afghanistan.

Ruthie brings home her very first boyfriend. When Ben picks Ruthie up from school, he sees a girl making fun of her and then she makes fun of him, which leads to the vice principal calling the police. Ruthie is in big trouble when she's caught slow dancing with her boyfriend when she's supposed to be babysitting Sam and David. Ruthie tries to figure out a way to break up with her boyfriend without making him cry. Ruthie is shocked to learn that her new upbeat friend Katelyn, suffers from cystic fibrosis. Ruthie fears that her parents may be heading for divorce court after overhearing them fight. Ruthie's friend Peter begs her to lie and not tell his mother that he smokes. Ruthie and Peter try finding Ben a girlfriend with his training dog, but things go awry once they lose the dog. Nobody seems to understand why Ruthie is acting so irritable lately. Ruthie has gotten her period for the first time and is embarrassed to talk about it, but the family sees it as a cause for public celebration.

Ruthie's boyfriend Peter starts spending increasing amounts of time with the Camden’s, and he even tags along on their vacation. She also finds out a huge secret about Mary. Ruthie wonders why Peter always calls her honey or sweetie. Ruthie learns a secret about a shy, withdrawn classmate from school. Ruthie enlists Lucy's help to convince their mom that she should be allowed to attend a couples party with Peter. Ruthie and Peter's school project lands them in trouble when they create a newspaper featuring false and derogatory stories about two former U.S. presidents. Ruthie is upset with Martin because she thinks he will get the garage apartment instead of her when Lucy and Kevin move out. When Peter calls, Ruthie tells him that she loves him but she can't date him if he drinks. Ruthie's foreign exchange student friend Maria appears to be making the moves on Ruthie's boyfriend Peter.

Newly high school freshman Ruthie gets in trouble at school when she decides to pull down Martin's pants in front of everyone as a prank. Ruthie falls for a guy she meets in detention, Harry a foster kid currently living in a county facility. Ruthie and Harry decide to break up. Carlos telephones the Camden’s and tells them that he, Mary and baby Charles are going to spend the holiday in Puerto Rico with Carlos' family and wants Ruthie to join them. Ruthie is visiting Mary, Carlos, and baby Charles in Puerto Rico, but she isn't exactly having a good time. Vincent also shows up at the house to speak with Eric about dating Ruthie. She is thrilled when her parents reluctantly agree to let her go on her first official date with Vincent. Upset that Vincent has not called her in three days, Ruthie catches him with another girl. Lucy, and Ruthie know a dark secret about Mary, and they agonize over how to tell their parents, who falsely believe that Mary is pregnant again. Ruthie's ex-boyfriend Peter and his parents pay a surprise visit to the Camden family, which creates problems for Ruthie and her current boyfriend, Vincent.

Ruthie sets out to gain the attention of a boy who is already dating one of her friends. Eric gets the cold shoulder from Ruthie after she loses the chance to date an older boy. Ruthie tries to ditch a boy who wants to go out with her. Ruthie introduces Eric to a boy she wants to date. Ruthie collects soup-can labels to help her school's newspaper. Ruthie's heart soars with hope when Martin and Meredith break up. Eric and Annie finally let Ruthie date Jack. Ruthie lends a hand at the hospital and reunites with an old friend. Ruthie attempts to recycle an essay that she wrote three years ago. Ruthie meets a troubled girl in detention, where a music teacher is assigned to watch the students. The girls bond over the lessons about Gershwin, as Ruthie tries to nurse her broken heart. Ruthie has a difficult time letting go of her feelings for Martin. Ruthie is upset that she hasn't gotten any calls on her new cell phone, so Eric gives out her number. Ruthie wants to enrol in a summer program that takes place in Scotland. Ruthie considers studying in Scotland over the summer.

Ruthie is studying in Scotland. Ruthie is nervous when she finds out that her parents are heading to Scotland. She reveals a very unattractive side of herself when she openly admits that she is not about to sacrifice her own freedom and happiness to come home and be with her sick father. Ruthie is informed of her father's health prognosis when her parents show up in Scotland, but she shocks them by reacting with very little sympathy or understanding. When Ruthie and T-Bone work on a school assignment about the genocide in Darfur, they get the whole Camden family, and the community involved in the cause. Ruthie will do anything to prove that she is not a little girl anymore. Ruthie insists that T-Bone get his driver's license so they can go away for privacy; unfortunately, T-Bone makes the mistake of asking Kevin to help him get ready for the test. T-Bone and Ruthie want to do something romantic for Valentine's Day, and they profess their love for each other in an unusual way. Ruthie tries to hide her tattoo from her parents, not realizing that they already know something is up with her. Lucy knows about the tattoo, but she has a very specific reason for keeping it to herself. Ruthie gets a sign on her own. When she loses a diamond in the ring that T-Bone gave her as a promise to get engaged someday, she thinks that this is her sign that maybe being with T-Bone is not the best choice. Ruthie learns that removing her tattoo will not be an inexpensive procedure, and after getting no sympathy from her parents, she tries "guilting" T-Bone into paying the bill. Ruthie and T-Bone decide to get back together, but an unexpected twist of events brings back unresolved issues with the guy who broke Ruthie's heart a year ago. Ruthie graduates high school early and informs Eric and Annie that she is wanting to forgo college in the fall to travel the world with T-Bone.

Retrieved from "https://7thheaven.fandom.com/wiki/Ruthie_Camden?oldid=7793"
Community content is available under CC-BY-SA unless otherwise noted.