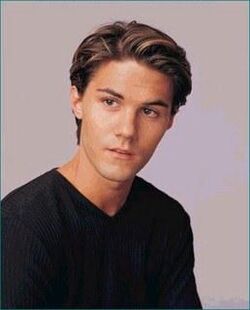 Robbie Palmer. He resided in the Camdens' residence for a while when he became homeless. He first came into the show when he met Mary through Community Service, when they were both sentenced to clean up trash. Mary's and later Lucy's boyfriend. He becomes part of the family, until later leaving to go to Florida to help his sick mother

Mary and Robbie met while working in the same community service. Both talked on the phone in secret until Mary told Lucy about him. When Eric and Annie found out about Robbie, they gave Mary's plea to be allowed to date Robbie into consideration. In the end, they decided Mary should focus on finishing her community service but can still talk to Robbie phone (since he also went to to a different school than she did). While talking on the phone, Mary tried to convince Robbie to come by the house so they can get to know each other better and her parents could also get to know him. Robbie hesitated because he thought Eric would never approve of him. Eric still had his doubts about Mary and Robbie but came around and convinced Robbie to come by the house. After some time, Robbie had pleaded Mary to persuade her parents to let them go out on an actual date. Mary got permission if it was a double date and short time. Robbie convinced his brother while Mary convinced Lucy. The date ended with both sisters making out with the brothers. Since Robbie went home early, it was revealed he had another girlfriend, Cheryl.

Retrieved from "https://7thheaven.fandom.com/wiki/Robbie_Palmer?oldid=6889"
Community content is available under CC-BY-SA unless otherwise noted.