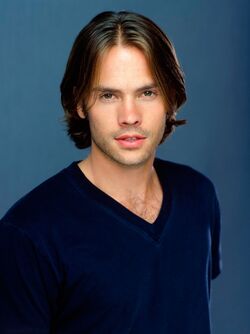 </div>Dr. Matthew “Matt” Camden, (born March 27, 1980) is a fictional character on the WB Television Network show 7th Heaven. He is the eldest son and child of the Camden family who live in the fictional town of Glen Oak, California jordancerater 1996-2002 (seasons 1-6). Barry Watson returned as Matt in three episodes of season 7, five episodes of season 8, ten episodes of season 9 (was considered a semi-regular cast member that year) and two episodes of season 10. Watson left the show when he was diagnosed with Hodgkin's Lymphoma, although he made the decision to leave in late 2001 - months prior to the diagnosis. When the show was introduced, Matt was the eldest of five and a junior in high school, he later became the eldest of seven when his younger twin brothers Sam and David were born. He was seen as the family flirt, having numerous serious and casual relationships. In earlier seasons he was known for not being able to hold down a job. He is relatively protective of his younger siblings but moves out of the house as soon as he can.

Matt is smoking. Eric finds out and tries to get him to stop by getting him a job running errands for Mrs. Bink. Eric and Annie fear the worst when they find out Matt is friends with a pregnant teenager Renee. Later he helps Renee deliver her baby when the baby’s father cannot be reached. Matt and Annie are car-jacked making him afraid to leave the house. Matt’s new girlfriend Tia wants to spend more time with the family than with him. He starts skipping school and church to help out Mrs. Bink who doesn't want anyone to know she is struggling. As part of the basketball team ritual Mary is elected to steal a drinking glass from the local teen hangout but Matt is faced with the theft charges with potential jail time. Matt is left in charge of the family when his parents spend a romantic Valentines Day camping trip with Patricia and Morgan Hamilton. Him and John Hamilton make plans to double date at the house. Matt is uneasy when his mother's oldest friend—a boy crazy divorcee named Rachel, makes a pass at him. He meets and becomes attracted to a girl named Heather who is deaf.

In the season 2 episode Who Knew?, Matt is confronted by his parents under suspicion of being a reefer addict, after a marijuana cigarette is found in the house which was given to Matt by a burnout class friend. Following a brief intervention in which a disappointed Simon storms out of the room (later referring to his brother as a 'big jerk' and a 'loser' — a decision he will regret for the rest of his life) Matt is found by Eric and Annie in church, reflecting on his criminal past. After promising to give up the thug life for good, Matt decides to focus his energy on an obsession which will later prove equally as detrimental to his health and wellbeing - deaf chicks!

Matt writes a trap letter stating he eloped with Heather after catching his siblings snooping around his private letters. After receiving a “Dear John” letter from Heather he begs his siblings for money so he get hop on a plane to Philadelphia to see her in person. He gets a job as a hospital companion for a terminally ill son of two church members. He gets dumped by new girlfriend Joanne after she overhears Mary and Lucy criticising her “perfect” appearance at a Camden dinner. He contemplates going to an out of state collage. Matt, who plans to leave home two months earlier than expected and take an internship in Washington D.C. with first lady Hillary Clinton.

Matt starts college. He is mistaken as a suspect in grand theft auto when he pulls over to help a pregnant girl. Him and Mary take a road trip that seems endless when their car breaks down. Matt thinks he is losing his brotherly touch when he doesn't foresee Lucy’s plan to have sex with Jordan. Heather is back in town and tells Matt that she's engaged. Matt gets a job at the Dairy Shack as a delivery guy. He gets fired from his new job and meets up with old girlfriend Shana. Matt decides to join the army without telling his parents about it first. He finds out he can't go to the army because he isn't fully measured for the job. Matt catches Mary kissing her almost-killer Michael Towner in Sergeant Michaels' squad car. Heather breaks up with her fiancé after learning he cheated on her, Matt tries to save his relationship with Shana after running off with Heather on her wedding day.

Matt decides to move out of the house and get his own apartment with his friend John Hamilton. Dr. Hastings gets him a job working the hospital cafeteria. He soon moves back home to help with his family but realizes he needs to live on his own. Him and Shana get back together after she said she wants to see other people. Shana is in two minds after being accepted into New York University but Matt is upset about being the last to know. He apologizes to Shana and tells her he loves her. Matt feels depressed over Shana going to NYU, then even more when he finds out that she's living with guys in a fraternity house. Matt says a reluctant goodbye to Shana. He struggles with his long distance relationship. Matt welcomes his ex-girlfriend Heather back into his life, threatening his relationship with Shana. He is forced to choose between his girlfriend Shana (who has moved back to Glen Oak for the summer) or his ex Heather, who confesses that she still loves him. Matt reconciles with Heather and at the end of the season finale the cliffhanger shows they might have gotten married.

Matt’s on and off relationship with Heather threatens to be off again permanently. He considers the pre-med track at collage. He fails in organic chemistry class and blames everyone else but himself. Matt blows Simon’s chance at a big date with an older woman when he is distracted by a close encounter of the female kind and forgets to pick him up. He pursues a woman who wants nothing to do with him. Heather reconnects with Matt but Matt is unsure of her intentions. He then finds out that she is dating someone else again. Matt shows up at the house unexpectedly after being kicked out of his apartment by John, who needs quality time with his girlfriend. He feels unneeded by the family due to Robbie and pays an unexpected visit to Heather and her new boyfriend. Him and Simon try to figure out why they delivered Mrs. Bink to the hospital. Matt and Lucy are suspicious after Lucy accidentally finds a condom in a misplaced wallet. They learn that the provocative prophylactic belongs to Simon, who just so happens to be spending the evening with his new lady friend, Sasha. An unlikely therapist helps him overcome his fears of becoming a doctor. Robbie's ex, Cheryl, accepts a date with Matt. Matt struggles about telling Robbie he's interested with his ex-girlfriend. Robbie is also hiding a secret from Matt that involves his ex-girlfriend Heather. Matt reveals that he has been dating Cheryl.

Matt lost his job at the hospital and is relying on his pals to find him new work. Cheryl goes to Eric for some guidance in her relationship with Matt but she misinterprets the reverend's input in the matter. Matt worries that a young woman in his study group might be a victim of physical abuse at the hands of her belligerent boyfriend. Matt, Lucy, Simon and Ruthie are banished to the garage apartment after protesting Annie's decision to give the place to Mary.

Simon and Matt use the twins to attract women. Simon uses Robbie's car to practice driving and he accidentally smashes into Matt's vehicle. Matt gets mail from two medical schools that he applied to but he is hesitant to open the letters. Matt seeks his fathers help with his love life, and wants to get serious with a girl - which leads him to seek out old girlfriends as to why they are no longer together. Determined to settle down before heading off to medical school, Matt goes in search of a woman to marry. Matt talks with a doctor that he works with about wanting to get a life-long mate.

Ellie Olson, a co-worker, catches Matt's eye after the future doctor decides to start looking for a bride. Her parents are Jewish and very concerned for the two. Matt and Ellie do not come home after their second date together in less than 24 hours. Matt stays out all night with Ellie and they secretly elope but when facing their parents, they are only able to summon the courage to say that they are engaged. Ruthie and Matt agree to keep the marriage a secret until a Jewish wedding is performed in a few months. Eric and Annie are unable to handle it all when they are shocked to find out during dinner that Matt is considering to convert to Judaism. Matt and Ellie argue over their wedding plans and their agreement to forgo buying an engagement ring and seek Eric for advice - who is not happy with Matt for getting engaged in the first place. Matt buys Ellie a fake engagement ring. Matt discusses wedding plans with Eric and his future father-in-law.

Matt and Ellie suspect that they might be having a child.

Matt and Ellie begin their student rotation in the ER but get off to a bad start by arriving late and angering Dr. Norton the attending ER physician. Matt and Ellie's relationship is tested when Matt quickly demonstrates an aptitude for the work but Ellie accuses him of trying to make himself look better than the other students, especially her. However, Matt ends up looking foolish when he can't figure out how to turn off the ringer on his cell phone and he gets stuck fielding calls from his family. Matt's day ends tragically, leaving him to question his destiny. Matt returns home to tell Eric and Annie that Ellie has left him and he's dropping out of medical school. Matt returns to celebrate his special "secret" two-year anniversary with Ruthie. Matt, who is having problems in his marriage to Ellie returns to Glen Oak for a visit and runs into his ex-girlfriend Heather on his flight home. Her own marriage is faltering. Matt, who is trying to salvage his marriage, questioning whether he still has feelings for his ex-girlfriend Heather. Matt realizes he loves his wife more and says good-bye to her forever.

Matt returns home for a visit and is instantly pulled into the family drama, especially regarding Simon and the Georgia situation as he feels Eric and Annie are not handling it the right way. Matt and Ellie decide to come by early and spend some time with the family before Thanksgiving and Annie is not pleased. Matt is upset when Simon, who has just faced a pregnancy scare with Georgia, wants Matt to prescribe birth control pills for him and his new girlfriend. After discovering that Mary (who does not appear in the episode) has filed for divorce and signed away custody of her son, Matt is at a loss for how he should to break the awful news to Eric and Annie.

Matt makes a surprise visit to Glen Oak and accompanies Kevin to a children's party where he dresses up into a well known children's play character. The Camden’s receive official invitations to Simon and Rose's wedding and to their dismay, they learn that the date conflicts with Matt and Ellie's graduation from medical school.

Retrieved from "https://7thheaven.fandom.com/wiki/Matt_Camden?oldid=7808"
Community content is available under CC-BY-SA unless otherwise noted.