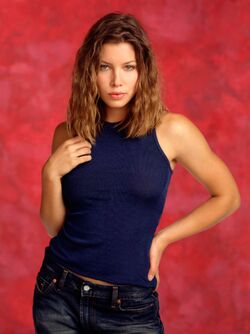 Mary Camden-Rivera, (born March 10, 1982) is a fictional character on the WB Television Network show 7th Heaven. She is the eldest daughter and originally the second child of the Camden family who live in the fictional town of Glen Oak, California from 1996-2002 (seasons 1-6). Jessica Biel returned as Mary in five episodes of season 7, one episode of season 8 and one episode of season 10. Mary is an aspiring athlete with an immense love for basketball. As months progress she seems to rise in both ability and confidence that she someday wants to play the WNBA. When the show was introduced, Mary was the second oldest of five and a freshman in high school, she later became the second oldest of seven when her younger twin brothers Sam and David were born. She was seen as the sporty tomboy of the family.

Mary wants to kiss a boy and asks Matt for kissing tips. While jogging with Lucy she runs into Matt’s friends Jeff. She attempts to keep her new boyfriend Jeff a secret from her family. As Lucy and Jimmy Moon start dating, Mary breaks up with Jeff. Mary uninvited her family to an important basketball game thinking it will make her more nervous. Mary contemplates getting a tattoo along with her basketball teammates against her parents wishes. As part of the basketball team ritual Mary is elected to steal a drinking glass from the local teen hangout but Matt is faced with the theft charges with potential jail time. While their parents are out on a Valentines Day camping trip, Mary and Keesha Hamilton plan to invite some friends over to watch movies but things get out of control when a huge party breaks out. Mary goes with Matt and Rachel (Annie’s friend) to a coffeehouse and makes her public singing debut when the band's singer doesn't show up. Mary meets future boyfriend Wilson. When her upset mother runs out of church, Mary chases after her and is accidentally hit by a car driven by a fellow classmate and needs emergency knee surgery.

Mary is sour about her knee surgery and becomes distant from her boyfriend Wilson. After Simon and Ruthie tell her how Matt has told Heather that he loves her she tries to get Wilson to do the same. She later splits up with long time boyfriend Wilson. Mary is angry when she discovers Matt paid a friend 20 dollars to take her on a date. Coach Koper flirts with Mary. She fears she will fail her comeback to basketball after her knee surgery. She babysits Wilson’s son when he went to prom. Annie gets a call from their doctor who reports that Mary is pregnant later finding out the doctor mixed the results up and Annie actually is the one pregnant.

Mary has to sit out of the first game of basketball season because she cut class. Her and Matt take a road trip that seems endless when their car breaks down. Mary dates Matt’s girlfriend’s psychopathic brother against Matt’s orders. Mary’s friend pressures her to take herbal pills to excess. Mary sneaks off to a co-ed sleepover. Mary meets future husband Carlos at the soup kitchen and brings him home to the Camden family for Christmas. Mary takes her drivers test. Mary sneaks to the pool hall to meet Wilson while Lucy covers for her only to do all the cleaning herself. Wilson wants to move back to Glen Oak but Mary doesn't have feelings for him anymore. Mary and Lucy are desperate to get out of the house and later get in a car accident with Ted a man who was drink driving. Matt catches her kissing her almost-killer Michael Towner in Sergeant Michaels' squad car. She thinks she hit a car in the school parking lot and to make amends promises the driver a date with Lucy.

Mary helps Ruthie with her secret plans to play on the school football team. Mary and her teammate Corey have been selected to receive a prestigious basketball award but the honor is taken away from Corey when the school finds out that she has been hiding a four-year-old daughter. Mary and her basketball teammates are upset the coach imposes a lockout on the season citing their studies should be top priority. Outraged by the apparent betrayal, Mary and some members of the team break into the gym and vandalize it. They are soon caught by the police and are arrested. She truly learns the consequences of her actions after she learns that she's losing her scholarship to college, faces possible school expulsion and jail time. Mary finds the love of her life in Robbie Palmer, while on community service. She is upset with her parents after Robbie is transferred but is allowed to speak to Robbie on the phone. Mary receives good news about her 30-day evaluation, then is angry when Eric won't let her date Robbie. Eric and Robbie talk and Mary and Robbie get back together. Her and Lucy are upset when their boyfriends won't call back. She and Robbie find a solution to their dating problem in his brother Rick dating Lucy with them as well. After finally gaining her parents' trust, Mary is allowed to spend a romantic dinner with Robbie, only to learn he has ulterior motives. Mary is praying that she will be able to get back together with Robbie even after what he did. Mary becomes indebted to Lucy after accidentally giving her a black eye. She has a dream in which she is playing basketball with the L.A. Lakers and believes it is a sign. When a talent scout actually contacts her, she wonders if her future might be coming back together after all.

Mary buys a car. She finds herself buried under a number of unpaid bills after losing her job at the pool hall. Mary strays even further away from her parents image when she is tempted to drink and smoke after work. She also makes friends with married co-workers Frankie and Johnny with questionable morals while working late shifts. Tensions run high as doubtful Julie lets Mary babysit Erica but when Frankie comes by and begs Mary to take care of her baby she can't resist she is then caught with an open bottle of beer while babysitting. After learning that she stole from the twins piggy bank to pay her bills, Eric and Annie take drastic action and send her to Buffalo to live with her grandparents. Eric invites Mary's ex-boyfriend Robbie Palmer to stay with them for a night after learning that he's homeless. She calls home again and hears Robbie's voice on the other end and assumes he's dating Lucy. Annie plans a mysterious day of cleaning as Eric discovers the shocking news that Mary ran away from The Colonel's to come back home because of a devious scheme she had with Robbie and freaks out. In reality, Mary is heading home for a huge surprise birthday party for Eric. Mary flies home to see Robbie and ask him to move to Buffalo. Robbie sparks jealousy when he meets a girl who looks just like Mary and Mary goes out to dinner with her old boyfriend Wilson. Robbie and Mary agree to be friends but an ultimatum from Wilson leaves Mary with a life-changing decision.

Mary is left to mull over Wilson's marriage proposal and it is even more confusing when she has a romantic encounter with a fellow firefighter trainee who shows an interest in her. The Camden house gets a little more crowded when Mary returns and tells her family that she is home to stay. Mary's sudden arrival has everyone in the family wondering what happened between her and Wilson. Mary finally opens up about what happen to her and Wilson and she starts to make amends with the family. Mary and Lucy ask their parents to find new boyfriends (and potential husbands) for both of them. Mary calls Wilson and learns from his landlord that he has moved out of his apartment. Mary and Lucy take the same classes at an area college and Mary is not too happy about the friends Lucy has. Mary meets up with Wilson who also has a new girlfriend, her old friend, Corey Conway. Mary and Lucy fly to Buffalo for a weekend or at least that's what Lucy thinks, as Mary makes plans of her own. While there, Lucy meets a police officer named Kevin who confiscated her bag, and he invites Lucy and Mary to a double-date with him and his brother. Eric catches Mary and Lucy in the kitchen with two guys in the middle of the night. The guys, Kevin and Ben, end up spending the night in the living room with Mary and Lucy.

Mary is dating a much older man and when her parents object, she plans to run away with him. Ken Smith pays a visit to Eric and Annie to accuse Mary of seducing his son. Mary heads back to Glen Oak for the big wedding event and she doesn't come by herself. Mary has some news for her father. Mary shares a big secret with Lucy.

Mary makes a surprise visit home to deliver unexpected news to her parents. Grandparents-to-be Eric and Annie hop a plane for New York, despite Mary's (not appearing in the episode) repeated pleas for her family to stay away during labor.

On the day of Simon and Rose's wedding, Carlos surprises the family that Mary will give birth to twins (Emma & Grace)

Mary (who does not appear in the episode) has recently given birth to twin daughters, so Annie heads off to Buffalo to help her out.

Retrieved from "https://7thheaven.fandom.com/wiki/Mary_Camden?oldid=7810"
Community content is available under CC-BY-SA unless otherwise noted.