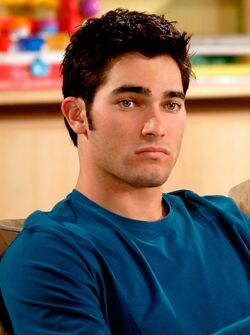 Martin Brewer (b. 1987) is a fictional character on the WB Television Network's most popular television series 7th Heaven. He is from the fictional town of Glen Oak, California

Martin Brewer is the only son of Marine, Beau Brewer. His mother died when he was young and he lived with his Aunt Betsy until he was 16. During his sophomore year in high school the Brewers moved to Glen Oak, California. Martin literally walked into the Camden's life by chance. He followed Ruthie Camden and her boyfriend Peter to the Camden house and everyone assumed that he was a friend of Simon's, except Simon who thought he was there to see his dad. While Martin's aunt, an aspiring fashion designer, wanted the two of them to move to New York, Reverend Camden managed to convince her to let Martin stay with them so as not to uproot him again.

Martin's favorite sport is baseball and he has been scouted by both colleges and professional baseball teams. One team even offered him a contract during his sophomore year in high school (which he eventually turned down to complete his education). Martin lived with the Camdens for two years before his father's tour in Iraq finally ended and he returned home. Martin graduated early, and with the assistance of Reverend Camden and his high school baseball coach, started college a semester early.

Retrieved from "https://7thheaven.fandom.com/wiki/Martin_Brewer?oldid=7849"
Community content is available under CC-BY-SA unless otherwise noted.