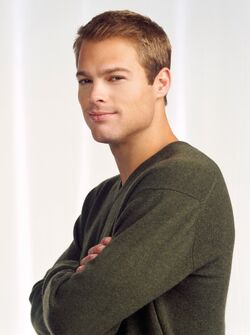 Kevin Kinkirk (b. 1977) is a character in 7th Heaven who is played by George Stults. He is first introduced as a police officer in a New York airport, and soon revealed to be Ben's older brother.

Kevin and Lucy set up a date as soon as they meet, and like each other so much they decide to pursue a long distance relationship (between New York and California). Kevin eventually transfers to the Glen Oak police force, and moves in with the Camdens. Kevin and Lucy eventually get engaged and marry each other, living together in the apartment over the garage and then moving into the house directly behind the Camdens' later.

In one episode, Kevin gets shot. He convinces Lucy to adopt a great Dane named Samson, but Lucy also makes the decision to adopt a tiny Yorkshire terrier named Delilah. Played by George Stults

Retrieved from "https://7thheaven.fandom.com/wiki/Kevin_Kinkirk?oldid=7839"
Community content is available under CC-BY-SA unless otherwise noted.