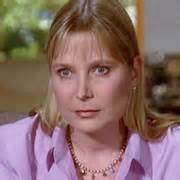 </div>Julie Hastings (née Camden) is a fictional character on the WB Television Network/the CW's most popular television series 7th Heaven, played by Deborah Raffin in 1996-1997 and 1999-2005.

Julie is the younger sister of Eric. She flies in from New York to be with the Camdens for Thanksgiving. While she is there, she tries to hide the fact that she is an alcoholic. When Simon is playing "Batman", he takes the key to the liquor cabinet, pretending it is the key to Gotham City. Julie tries to get the key back, but when he would not give it to her, she attacks him. Annie finds the two tussling, and in a fit of rage — a lasting side effect from her years of substance abuse during college — throws her out of the house. Instead of sending her to a hospital, Eric locks her in his bedroom while she starts to go through detoxification. She eventually checks herself into a rehab center. After living in the center for a few months, she goes back to New York to live with her parents, the Colonel and Ruth. She returns to Glenoak two years later to get a fresh start.

While in Glenoak, she gets a job as a teacher and falls in love with Hank Hastings, the doctor who almost killed Matt during delivery. Julie becomes pregnant and wants to leave Hank because she feels that he was cheating on her with one of his female patients, which is not true. Julie goes into labor at the Camdens’ house and Hank delivers the child in Eric and Annie’s bedroom. She gives birth to a girl, whom she and Hank name Erica, after Eric and Annie. When Julie and Hank need a babysitter, they take the risk of allowing Mary, who had been quite irresponsible, to babysit. Later, when they cannot get a hold of Mary, they rush back and discover that their place is a mess, the phone is off the hook, a liquor bottle is on the table, and Mary's friends' baby, Mercy, was left with Mary while she was supposed to be babysitting Erica. Julie later wants to leave Hank again when she discovers that he had left his job at the hospital to be the head of a Women’s Clinic without discussing it with her first. Eric locks them in a room at the clinic and tells them that they could not come out until they had worked out their problems. They reconcile and Hank learns that Julie is pregnant again. She gives birth to a baby boy. Both she and Hank attend Lucy’s wedding.

Retrieved from "https://7thheaven.fandom.com/wiki/Julie_Camden?oldid=7756"
Community content is available under CC-BY-SA unless otherwise noted.