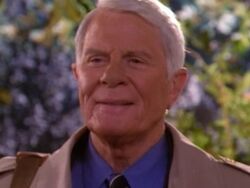 John is Eric, Julie, and George's father, who used to be in the Marines. Whenever he visits his son's home to visit the grandchildren, he expects military discipline, order and organization, even from his son. He was a Colonel in the Korean War and was evacuated for an unknown reason in 1953. He met Ruth the same year and they were expecting Eric and had to get married. He first appears in "Seven Is Enough", when he and Ruth go on their annual visit to the Camdens, where they always bring candy that their grandkids dislike. During their visit, they go to a hardware store with Annie, Mary, and Lucy. The cashier, Emma, has rings that are a replica of Annie's stolen ones. She suspects this, but then excuses this thought. The Colonel visits Eric at the church and is forced to put a cigar away because of a church rule. He suspects someone is in the room, and sure enough, a homeless orphan named George was hiding there. The Colonel and Ruth adopt him after Eric lets them. He later appears in "It's About George", where George's biological father Will Grayson is found to be alive and wants his son back. He does not want this to happen, so he is willing to sue. Eric informs his father that he would lose and that Will legally has every right to take George with him, but George refuses to move in with Will and runs away. Eric later creates a compromise and he reluctantly accepts. He also meets Jimmy Moon in this episode, where he and Ruth scare him, but later apologize. He thought that Julie hated him and that he lost all of his children. Julie later confronts him and tells him that she loves him. He and Ruth buy Eric an RV the final episode, though he is not shown.

Apart from his annual visits he also makes occasional surprise visits. In "Lead, Follow or Get Out of The Way", he arrives to help Eric with his major news coverage of his service and in the process helps Mary who is contemplating quitting basketball, Simon, who is training to be a magician (despite the Colonel's dislike for it), and Lucy who is slacking in school, and starts to connect with her.

Despite his authoritarian tone and military demeanor, "The Colonel" has never served in the armed forces in any capacity and his personality is the result of his suffering form severe dementia, for which his family play along with to keep him happy.

Retrieved from "https://7thheaven.fandom.com/wiki/John_Camden?oldid=7656"
Community content is available under CC-BY-SA unless otherwise noted.