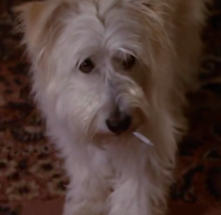 Happy the Dog is a fictional character on the WB Television Network's most popular television series 7th Heaven, played by a dog, also by the name of Happy.

Happy is the Camden's family dog. She made her debut on the show's pilot Anything You Want after Simon — who's begging to his parents for a dog of his own fell on deaf ears — resorted to praying to God and eventually selling his soul to Satan himself. One day while up in the attic Simon heard a bark from outside. Fearing he was suffering from auditory hallucinations, brought on by some suspicious mushrooms he had consumed early that morning, Simon worked up the courage to inspect the yard where, covered in dirt and fleas, he found Happy. Destined for the pound and eventual lethal injection, Simon convinces his parents to allow him to keep her and from henceforth - Happy was a Camden.

In the season 2 episode titled “Who Knew” Matt receives a marijuana cigarette from the high school’s resident stoner. It’s exceptionally loud so he decides to hide it in Happy’s fur. Happy, who used to moonlight as a drug mule for the Sinaloa Cartel, holds the weight for as long as possible. When greeting the deplorably creepy Camden patriarch, Eric, Happy inadvertently narcs on Matt by expelling the joint. “Ay Caramba!” Eric proclaims, as visions of his son listening to Bob Marley in smoky basements adorned with black light posters fire through his head. Happy, who enjoys a fat toke is devastated, and the incident causes irreparable damage between she and Matt. So much so that Matt tells his parents they need to “get rid of that snow roach snitch or so help me God.” Happy is granted asylum, but things are never the same between her and the oldest Camden.

In the season 2 episode ...And Girlfriends, the family discovers that their beloved dog is actually a runaway named Whitey. Her previous owners attempt to take Happy back but after a lengthy discussion, in which Simon offers his firstborn, it is agreed Happy will remain with the Camden Family.

Happy has since then lived with the Camdens for the rest of the series, and will even accompany them on their journey around America, along with the whole family and their friends.

Retrieved from "https://7thheaven.fandom.com/wiki/Happy?oldid=7846"
Community content is available under CC-BY-SA unless otherwise noted.