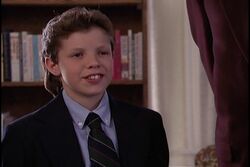 George Camden is a character on 7th Heaven, played by Sam Saletta.

George is a former orphan who for many years lived in an office cupboard. Despite his many hardships, including a father who faked his own death just to get away from him, George is a confident and happy individual whose traits often draw the ire if his future nephew, Simon.

Little is known about George's life before making his first appearance in the season 1 episode Seven is Enough, where he is found by The Colonel living in a cupboard in Eric's church office. After discovering he, George, and his wife, Ruth share a common interest in degenerate gambling, George is adopted by the couple and moves with them to their ranch in Buffalo.

During the 19th episode of the first season it is reveled that George's biological father, Will, is actually alive and well and plans on taking George back. After heated discussion between Will, John and Eric, it is agreed by all parties that it would be in George's best interests to stay with the senior Camdens. Will would later come to live with John and Ruth Camden in Buffalo.

In a season 4 appearance upon returning from a trip around the world with Ruth and the Colonel, George appears to have become a devotee of the Rastifari religion.

George only makes brief appearances throughout the rest of the series. It is revealed in the season 11 episode Tit for Tat that George, following in The Colonel's footsteps, had joined the army and is serving in Iraq, where he is later killed by an IED.

Retrieved from "https://7thheaven.fandom.com/wiki/George_Camden?oldid=7205"
Community content is available under CC-BY-SA unless otherwise noted.