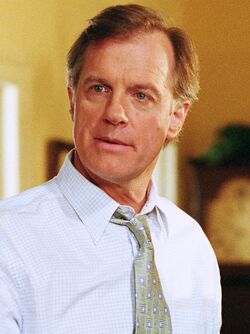 </div>Eric Camden (b. 1954) is a fictional character on the WB Television Network's most popular television series 7th Heaven, played by Stephen Collins.

Reverend Eric Camden is the husband of Annie and the father of Matt, Mary, Lucy, Simon, Ruthie, Sam and David Camden. His parents are Colonel John Camden and Ruth Camden. He is the minister of the Glen Oak Community Church.

Reverend Camden was raised in New York City by his parents, Colonel John Camden and Ruth Camden. Based on the episode "Halloween" (Season 1, Episode 6) it appears that Eric Camden was born in 1954. According to the episode "One Hundred" (Season 5, Episode 12), his birthday is in January, which would make him about 47 years old. Rev. Camden attended college for five years and graduated from Kolbel Seminary. Shortly thereafter he married and began a family with Annie Camden (nee Jackson). All of these events took place many years before the pilot episode. He also has one sister, Julie Camden-Hastings, who ended up marrying the doctor that delivered Eric and Annie's oldest son Matt and youngest twins, Sam and David.

Reverend Camden has been the pastor of Glen Oak Community Church - in the fictional town of Glen Oak, California for over 25 years. Almost every episode of the series has involved him helping members of the community. Some of these people have been churchgoers, teens in trouble, and friends of the Camden children. Throughout the first six seasons Eric was the only acting minister of the church. During season 7, the church deacons hired Chandler Hampton, a young college graduate as the new Associate Pastor in order to help facilitate church operations following Eric's double bypass surgery. The sudden move was frowned upon by Eric and he left the church for six months, making an inspirational returning in April 2003 as the celebrant of daughter Lucy's wedding to Kevin Kinkirk. For one year Eric and Chandler worked side by side, until Chandler left the church in the Season 8 finale. Beginning in season 9, Lucy took on some duties at the church as the new associate pastor - including teaching a class of young women about sex - while completing college and finishing out her pregnancy. Beginning in the Season 10 opener, Lucy officially joined the church full-time.

Eric is the father of seven children, and grandfather of six. Over the years he has seen all of the Camden children through their darkest moments. Some of these include Matt's experimenting with drugs, Mary's fast moving relationship with Robbie, guiding a distraught Lucy following the tragic death of a good friend, Simon's sudden interest in promiscuous sex, and trying to keep his eye on the maturing Ruthie. Through his three oldest children, Matt, Mary and Lucy, he has six grandchildren: Matt's twin sons, James and John; Mary's son, Charlie, and twin daughters, Emma and Grace; and Lucy's daughter, Savannah.

Eric Camden has appeared in every episode of 7th Heaven.

Retrieved from "https://7thheaven.fandom.com/wiki/Eric_Camden?oldid=7342"
Community content is available under CC-BY-SA unless otherwise noted.