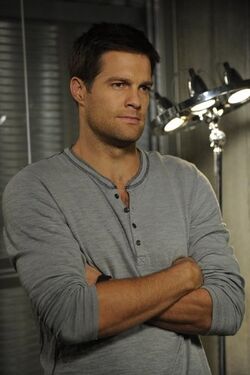 Ben Kinkirk (b. 1979). Kevin's younger brother and Mary's ex-boyfriend. He is introduced as Mary's fellow firefighter trainee in Buffalo (in the season six episode "Relationships"). Ben becomes interested in Mary while she is pondering Wilson's marriage proposal. Ben attends Kevin and Lucy's wedding in the episode "We Do." The last time he appears is in season 11's "Pain in the Neck", where he attempts to flirt with Ms. Margo, the teacher who made a move on Eric.

Retrieved from "https://7thheaven.fandom.com/wiki/Ben_Kinkirk?oldid=7786"
Community content is available under CC-BY-SA unless otherwise noted.