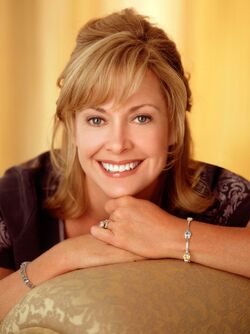 Annie is the wife of Eric and mother of Matt, Mary, Lucy, Simon, Ruthie, Sam and David Camden. She has a half sister named Lily, through her father, Charles Jackson. Her mother is Jenny Jackson. Her full name is revealed at her mothers funeral when her father Charles says to her something to the affect of, "Don't take that tone with me, Anne Mae."

Annie Camden is presented as the perfect wife and mother, but has an interesting past. In the season 2 episode Who Knew?, in which Matt is accused of smoking marijuana, Annie confesses to Eric that during the summer before college she experimented with drugs, alcohol, and anonymous sex with multiple partners, earning her the nickname ‘All the Way Annie‘ — a moniker that would stick with her for many years. Eric is shocked upon hearing this and the admission will haunt him (and their marriage) throughout the rest of the series. Her experimentation ended when her friend's boyfriend drove under the influence and was killed. During her college education, Annie studied everything from art to business and economics, and in later seasons returned to school to earn her Masters.

Though she has chosen to be a stay at home mother, Annie is a jack of all trades. She balances a family of nine on a reverend's pay, is a plumber, builder, seamstress, cook and much more. She also serves from time to time as the treasurer for the church.

Annie is the backbone of her family. The mother of seven, she is often the one the children come to talk to, often over milk and cookies. A grandmother of six, she tries with her husband to instill strong morals in her children. She is noted as hoping Ruthie will not follow in the footsteps of her or her two older daughters and marry young. She hopes Ruthie will take the time to travel, see the world and grow before she marries and has children.

Despite her sweet and loving nature, Annie is prone to sudden fits of rage, often lashing out at family members - and sometimes members of the public - for the slightest indiscretions*. These outbursts (in most cases unprovoked) may be attributed to her history of substance abuse before and during her college years.

Annie was the only daughter of her parents. Her mother, Jenny, dies early in the first season from cancer, a death that strikes Annie hard. Harder yet is her father's quick bounce to a relationship with Ginger. During one episode, Annie leaves the church after her father brings Ginger to service. Mary chases her and is struck by a car. Annie accepts Ginger slowly and Ginger and her father wed. Her father suffers from Alzheimer's disease and Annie spends more and more time with him in Arizona before he dies. Annie is quoted in later seasons as saying that she likes Ginger a lot more now that her parents are back together. In an early season, Annie learned of an illegitimate daughter her father had from an affair. She eventually meets this half-sister, Lily, and the two form a relationship over time.

Retrieved from "https://7thheaven.fandom.com/wiki/Annie_Camden?oldid=7745"
Community content is available under CC-BY-SA unless otherwise noted.